Is There Life Out There? Another Step Toward Its Improbability 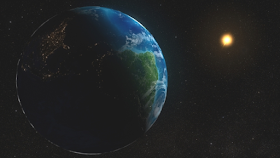 It seems that much of the current research in astrophysics and space science is focused on the search for extraterrestrial life. Whether we are sending probes to Mars, searching for extra-solar planets, or looking for water on moons and planets in our solar system, a major goal of these efforts is discovering environments that are suitable for life, or even finding evidence of life itself. The question of whether or not other life exists is not only an important scientific question, but maybe even a philosophical, sociological, psychological, and theological question as well.

Much of the search for extraterrestrial life has centered on whether or not a planet or moon is in an orbit that permits its surface to retain liquid water. The presence of liquid water is certainly one of the most important requirements for complex life. If a planet's location is too close the star it orbits then it will be too hot and water will boil away, and if a planet is too far from the star, all the water will freeze. The habitable zone is the region in which the planet's orbit is just the right distance from the star to harbor liquid water on its surface.

Of course, life requires much more than simply liquid water; a fact that is often not acknowledged in the search for extraterrestrial life. When scientists claim that they might have found an "earth-like" planet they mean one of three things: either the planet (1) is in the habitable zone, (2) is about the same size as earth, or (3) is a rocky planet and not gaseous. A cursory glance at this list should alert any reader not to take too seriously the claim that scientists may have found another earth-like planet. After all, Mars is in the habitable zone, Venus is about the same size as earth, and Mercury is rocky, but none of those planets have the necessary characteristics for supporting complex life. The latter two are inhospitable to life of any kind.

So what are the necessary requirements for a planet to support complex life? There have been many attempts to try to catalogue the requirements for life. Perhaps the most famous attempt is the Drake equation, first written by Frank Drake in 1961, which tries to quantify the number of active civilizations capable of broadcasting communication signals.1,2 The equation multiplies seven important factors together to get an estimate of the number of civilizations with detectable signals in our galaxy. Those factors are (1) the average rate of star formation in our galaxy, (2) the fraction of stars that have planets, (3) the average number of planets that could support life for each star with planets, (4) the fraction of planets that could support life that actually develop life, (5) the fraction of planets with life that eventually develop intelligent life and civilizations, (6) the fraction of civilizations that develop technology that gives detectable signs of their existence, and (7) the length of time for which such civilizations broadcast those signals into space.

Although the Drake equation may be a reasonable starting point for the discussion about the probability for finding extraterrestrial life, it has been widely criticized for neglecting some very important factors. In addition, many of the factors used have such a broad range of possibilities that any attempt to quantify the number of civilizations that satisfy the Drake criteria give estimates from as little as 10-11 to as high as 107 such civilizations in our galaxy.2 In 2000, Peter D. Ward and Donald Brownlee published the book Rare Earth, which addressed some of the deficiencies of the Drake equation by proposing additional terms that should be included, but they did not make an effort to calculate an accurate number using their additions.3

When I give talks on complex life in the universe I will often quote a quantitative estimate of the probability of finding such life made by the astrophysicist Hugh Ross. In 2004, Ross compiled a list of 322 parameters that are necessary for a truly "earth-like" planet to exist,4 and in 2009, he released another list of 676 parameters that are necessary to sustain uni-cellular life for 3 billion years on a planet.5 These estimates are what scientists often call "back of the envelope" or "order of magnitude" calculations. They are not meant to be exact but to give a best approximation based on known quantities. In his calculation, Ross includes correlations and the expected number of planets in the visible universe. He determines that the probability for finding any planet in the visible universe that meets the requirements to be 1 in 10282 for the first case and 1 in 10556 in the latter case. With such low probabilities it is basically impossible that any other complex life exists in the visible universe. (It should be noted that as a theist I believe that since God created at least one planet with life he could have created many planets with life despite the odds. A discovery of another planet with life may actually increase the evidence for a creator if these low odds continue to hold up to more scrutiny.)

I am often criticized for taking Ross's estimation seriously. Critics argue that Ross is being too conservative in his estimation, and those who have looked at his calculation in detail claim that his numbers are not well documented. (As to the latter criticism, I agree that although Ross lists references for all of his numbers, it is nearly impossible to ascertain the individual probabilities from the references as presented in his table. It would be helpful for him to footnote each individual probability with its references.) Regarding the first criticism, I believe that Ross's calculation only seems to be conservative because other scientists have not taken the effort to compile a comprehensive list of the conditions necessary to support complex life, and because scientists too easily accept the rhetoric to "follow the water" expecting that life can thrive given only a few simple ingredients rather than a long list of necessary requirements.

However, a recent publication takes another step that narrows the probability for finding complex life and provides more validation for the low probability of finding life that Ross has calculated. In this recent paper, five scientists have examined the extent of the habitable zone around a star, considering not just the presence of liquid water, but also whether or not certain gases in the planet's atmosphere, such as CO and CO2, would be toxic for any life more complex than simple microbial life.6 The new paper shrinks the habitable zone for simple life by a factor of two and for complex life like humans to one-third of the previous estimate.

The paper also seems to practically rule out any life around stars categorized as M dwarf stars. The authors write, "In addition to possible limits from toxic gas buildup, there are other habitability concerns with M dwarfs that may also apply to microbial life, such as potential atmospheric erosion from flares and climatic impacts from tidal locking...all of which may render M dwarf planets poor candidates for the development of complex or intelligent life." This is an important development, for many of the known extra-solar planets that have been promoted as being suitable for life orbit M dwarf stars. Although the other factors listed by the authors have been known for a while, scientists have continued to laud the discovery of planets around M dwarfs as possibly having liquid water and so being habitable. Hopefully, these new calculations will somewhat diminish the hype every time a new planet is found around an M dwarf star.

The assertion that planets capable of supporting complex life are very rare in the universe continues to become stronger as we learn more about the necessary requirements for a such a planet to exist. If the earth is rare, or even unique, it challenges the Copernican principle that our planet is just an average planet in an average place in the universe. It strengthens the case that the earth seems to be special, and therefore that its occupants may also be special in the universe. As such, these scientific findings continue to add credence to the biblical idea that the earth and humans are not just accidents in the vast universe, but that they are specially created by God with intent and with a purpose.