It is impossible to understand how big this is. Consider something much smaller, the distance to the nearest star which is about 4.3 light years away. If we could travel to that star at about the same speed as the Apollo astronauts traveled to the moon, it would take almost 1 million years to get there. That is just to the closest star in our galaxy! Even if we could travel at the fastest speed of any object ever created by humans it would take about 30,000 years to reach the nearest star.  You can do the math, but even at that extreme speed it would take 700,000,000 years to cross our galaxy.

Atheists have made the claim that certainly humans cannot have any significance in the universe given its size.  Carl Sagan has called our planet a "pale blue dot" in the vast ocean of space and said, "Our posturings, our imagined self-importance, the delusion that we have some privileged position in the Universe, are challenged by this point of pale light. Our planet is a lonely speck in the great enveloping cosmic dark." In the movie Contact, based on Sagan's book of the same title, the statement is made a few times that, "The universe is a pretty big place....  So if it's just us, it seems like an awful waste of space."  The first sentence is undoubtedly true. The second sentence is someone's opinion. But is it also true?  Does the size of our universe mean that there is a lot of wasted space? Does the fact that we occupy a speck in the cosmic domain mean that we are insignificant? Why would any designer or creator invest in so much real estate and still give any significance to the occupants of one tiny rock?

To answer these questions we need to understand the process that has taken place over the last 13.8 billion years to form our planet earth.  There are three things I want to discuss. (1) Could there be any more or any less stuff in the universe than there is in a habitable universe? (2) Where did the elements that make up our planet and us come from? (3) What is the relationship between age and size in the universe?

So we live in the youngest, smallest, universe that we could live in. Any changes in age, size, or number of stars and galaxies would result in a universe that could not support any higher life forms. The statement made in Contact is just wrong and is bad science. Despite the vast size of the universe there is no wasted space, even if it's just us. Now I don't know if there is any other life in the universe or not, but for the sake of argument, let's say that God did want to create a universe with the physical laws we know of and wanted to populate that universe with only one significant species. If so, the end product would be this universe which is the smallest, youngest possible universe with no wasted space and no extra stars or galaxies.  Humans appear in our universe at the earliest time possible. It's almost as if the universe were, indeed, created with us in mind. It is an extremely naive statement to say that the size of the universe alone indicates that humans are insignificant. 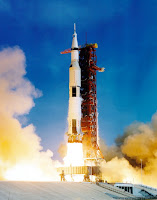 Sometimes critics of the Christian God will argue that since they wouldn't do something in a certain way then God wouldn't do it that way either, and so God must not exist. In the case of the universe they argue it would be ridiculous to create such a vast universe with very few places in the universe that are hospitable to life. But the critics are missing some important points. First, though vast, the universe is the smallest it can be to do the job of hosting a life-supporting planet as discussed above. Second, if the goal of the creator is to make a home for humans who do have significance, the infrastructure for that home must be adequate. The critics don't see the overall picture of the purpose of the universe. Let me give you an example. When I was growing up I was fascinated by the space program which had the goal of sending humans to the moon and bringing them back to earth safely. To make such a mission possible, the most powerful rocket ever made was built: the Saturn V.  On top of this rocket that stood 36 stories high was a little tiny command module with barely enough room for three astronauts to sit in. Out of the entire rocket only a tiny fraction of the infrastructure was hospitable to life in space. So I guess the rest of the Saturn V was a colossal waste of space and indicates the lack of any real designer. The size and scope of the Saturn V was exactly what was required to send humans to the moon just as the size and scope of our universe is exactly what is required for us to live. Both the universe and the Saturn V are exquisitely designed to support life in only a tiny region of its entirety. But there is no wasted space. We live in a small big universe.